How long does it take for a word to lose it’s meaning?
Does ‘sorry’ take back the words you were screaming?

Does it take back all those times I have cried?
Or the feeling of wanting to run and hide?

Does it take back the pain, that’s black and blue?
Or if you say it enough, will it someday be true?

How long will it be before you start to see?
I have to ask do your actions reflect your love for me? 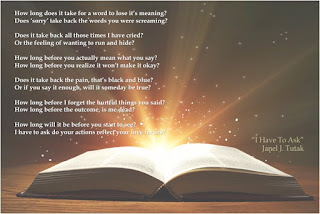 Haha. I stand corrected. When I posted on Day 1 Another Fight, and I said that was the one my father carried in his wallet. I was mistaken. It wasn't that one, it was this one. I was going over my old journal site again and came across an entry discussing it. I knew there was one poem he had carried around. I guess it was this one instead. Oops! Can I blame it on mum brain? Or getting older? This is journal entry from May 6th 2006 (so 10 years ago?! Crazy)

I think I wrote it, and showed it to my mom, (the person who used to read everything I wrote back then), and she showed it to him... as a way of saying look what you've caused your daughter to write... hoping it would be a bit of a wake up call.It was written when he was still living in the house.
I really have no recollection of writing it, though when I read it I vaguely see myself in my room, crying.
Anyways he took the only copy of the poem I had, so I really didn't know it existed until last year he showed it to me. He carries it around in his wallet, and I copied it down. We figure it was written around summer of 2002.

Anyways, hopefully you can all forgive my misremembering.
Posted by Unknown at 06:00