once again
i've spotted a pretty eyed boy
and i can't resist his warm embrace
he speaks to me, soft words of poetry
flowing off his singing voice
and i'm falling

something in my heart weeps to the sound
and i'm alone again
he's pulled away
left me, and i'm so hurt
and i'm falling 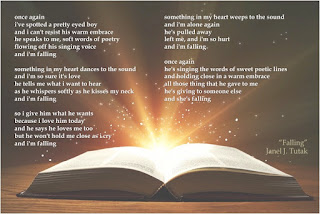 They say that the English language is one of the hardest languages to learn. One of the reasons being that many words have different means though spelt the same. Falling for instance. In this poem it means falling in love as well as falling down. Ok, I know it's not the same thing as read and read. But you get my point. It's actually one of the reasons I like this poem, because of the different meanings.